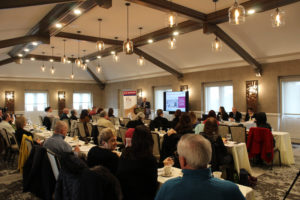 Harrisburg, PA February 27th, 2019 – Thomas, Thomas & Hafer LLP hosted an event for guests and clients at The Country Club of Harrisburg, PA. The event was well attended. It was also broadcast live with a private link over the internet to audiences across the state and across the country.

Any questions about the conference can be directed to Anthony T. Bowser at (717) 441-3959 or email at ABowser@tthlaw.com.