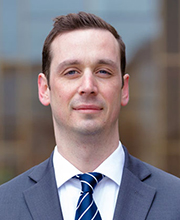 December 16th, 2019 – Thomas, Thomas & Hafer LLP is pleased to announce the hiring of Timothy R. Kraeer, Esq. Mr. Kraeer will be working out of the firm’s office in Allentown, PA. Mr. Kraeer will be litigating Workers’ Compensation and General Liability matters.

Mr. Kraeer comes to TT&H with experience in civil litigation, personal injury and workers’ compensation matters. He attended law school at Widener University School of Law in Wilmington, DE. Mr. Kraeer graduated with honors and finished in the top twenty percent of his class while earning Dean’s List Honors and Certificates of Achievement in several subjects.

Mr. Kraeer began his career as an unpaid intern after finishing his first year of law school. With his strong work ethic and ability to learn quickly, he earned himself a paid position.

Mr. Kraeer is an avid fan of both the Philadelphia Phillies and the Philadelphia Eagles, attending games of each every year. Timothy has a background in music and has played the piano since 4th grade and performed in concerts while in high school.

Thomas, Thomas & Hafer, LLP is a regional civil litigation defense firm with over 80 lawyers in nine offices throughout the Mid-Atlantic region.