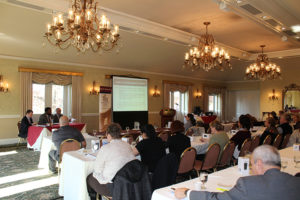 Harrisburg, PA November 15th, 2017 – Thomas, Thomas & Hafer LLP hosted an event for guests and clients at The Country Club of Harrisburg, PA. The event was well attended. It was also broadcast live with a private link over the internet to audiences across the state.

The event was organized by Anthony T. Bowser, Esquire. Anthony welcomed the audience and was part of a panel discussion on Employment Law Year in Review. Anthony was joined with Anthony D. Cox, Jr., Esquire and Jeffery T. Criswell, Esquire.

Following this was a breakout session led by David L. Schwalm, Esquire and Matthew R. Clayberger, Esquire. Their presentation focused on Constitutional Claims in Employment Litigation. While this was going on, Anthony T. Bowser, Esquire was joined with Mark R. Hamilton, Esquire in presenting the topic of Best Practices for Handling Administrative Agency Audits & Investigations.

Suzanne B. Merrick was joined with E. Meredith Wolak in presenting the topic of Handling the ADA Reasonable Accommodations Process. This session was followed with a presentation led by Mark J. Powell, Esquire and Anthony T. Bowser, Esquire on PA’s Medical Marijuana Act – What Employers Need to Know.

Any questions about the conference can be directed to Anthony T. Bowser at (717) 441-3959 or email at ABowser@tthlaw.com.