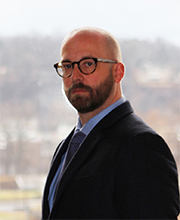 January 3rd, 2017 – Thomas, Thomas & Hafer LLP is pleased to announce the addition of John A. Lucy to our firm. He is admitted to practice law in the Commonwealth of Pennsylvania. John is an Associate in the Harrisburg Office.

John has practiced general litigation with an emphasis on insurance defense, medical malpractice defense, and commercial litigation. He has represented clients in state, federal, and appellate courts as well as before mediators and arbitrators.

John is a graduate of James Madison University with a Bachelor of Science degree and received his Juris Doctorate from Pennsylvania State University, Dickinson School of Law, where he was a member of the Trial Moot Court Board.

John resides in East Pennsboro Township with his wife, Virginia.